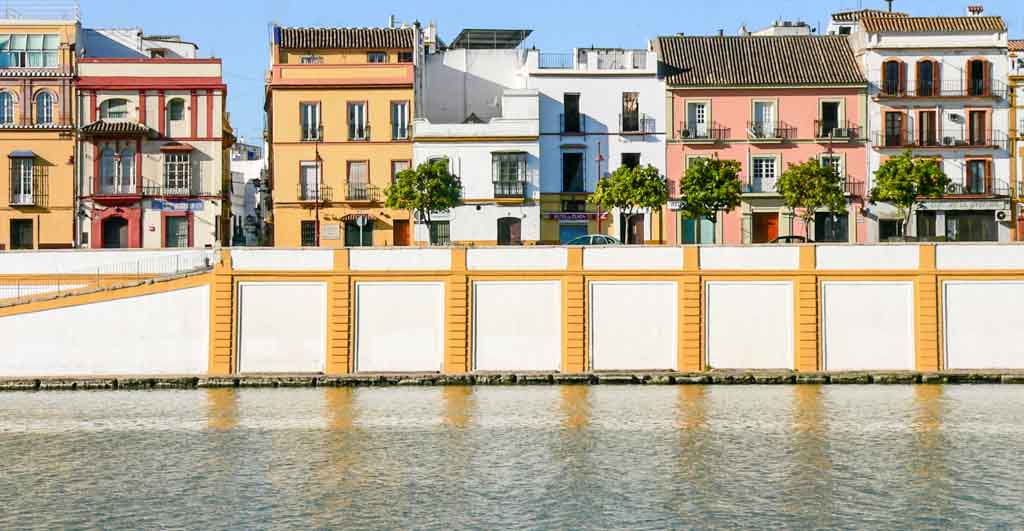 “Hello. My name is Inigo Montoya. You killed my father. Prepare to die!”

– Inigo Montoya ( The Spaniard ) from The Princess Bride, one of my favourite movies!

Welcome once again to Travels with my Belly. Have an empanada! They are free today. Would you like a coffee? You are always welcome and at home away from home with Travels with my Belly. All are welcome! Tell your friends! No seriously tell them and ask them to subscribe too 😉 Today I am taking you to Seville in September.

Today, we will be time travelling… I know! It’s exciting, right?! There will be gladiators and Gitanos, wonderful Spanish food and wine, and sultry sunny dreamy streets dressed in all the rainbow colours. Beat that, Dr Who!

But, I am getting ahead of myself. All this is to come!

So I want to take you back in time. I want to take to Spain and the city of Seville in September 2005. I actually used to blog, many years ago. This is something I wrote there and republishing here. Although the writing is preserved -with a little editing, I’ve expanded upon the original with new content.

Firstly, much like tapas itself, we will stop here and there for a moment, to enjoy the food of Spain. The writing here in this section is new, but the photos are from back way when in long lost 2005. My first camera was a Casio! I brought it especially to take to Spain. The camera was cheap and my photography skills cheaper still -so you’ll have to forgive the lack of photo quality here! Do you remember what your first camera was?

Sure, I could have gone to something like Unsplash and downloaded a shot for free but that isn’t me. I like to keep it as authentic and personal as I can. These are the photos I took. These are the snapshots of a moment in time. They are mine, pressed like butterflies forever preserving a moment. I was there. This was the food that I actually ate.

I’m also adding a little at the end with my final thoughts to wrap things up. With that all out of the way, let’s get in the time machine and take it for a spin. Just don’t press that big red flashing button over there. Last time I pressed that button it ended in dinosaurs… DO YOU WANT DINOSAURS? … Don’t answer that.

Stop looking at that button…

A wonderful refreshing Spanish soup served cold. A mix of tomatoes, red peppers cucumber, garlic, all enriched with enriched extra virgin olive oil. It is wonderful Nothing like it on a hot day.

There is a similar white soup called sopa de ajo ( garlic soup ) also served cold and made with ( surprise! ) tons of garlic and garnished with grapes.

No matter how many times I fly, I can´t lose the wonder of it. The impossible dream of flight. I watch in awed wonder as the beautiful alien landscape of silver clouds drifts below outstretched silvered wings. How I want to walk across those misty mountains and dance the frothy plains of ethereal white.

My plane landed late so I got a taxi from the airport with a manic. Obviously, he was a frustrated part-time formula one driver! He raced through the streets only stopping a few times to beep the car horn and shout “cabron!” from the window. My thanks to the driver for getting me to my hotel in super speedy time! I’m quite certain records were broken. Pole position, for sure!

Actually, a nice guy and we chatted a bit before I went into my hotel ( as much as possible with my limited Spanish ) My thanks to him again for being the first person of Andulacia that I have met. My thanks because it was such a warm welcome. I have found the people of Andulacia friendly, so far.

Seville is a wonderful city. A feast for all your senses and your stomach. This city is awash with as much charm as it is in sunlight. You might turn a corner and stumble across a secret plaza with a fountain dressed with blue ceramics giggling to itself in the quiet shade or hear sounds of a guitar vibrating in the air as you amble through the colourful streets.

Intoxicating scents of cooking and coffee drift across sunlit tables. If you are lucky, and I was, you might sit a while in a shady garden and listen to the passioned voice of a flamenco singer. This is a city of dreams.

Small servings of food served in bars and cafes across Spain but it is in Andalucía that the tradition is most alive. Many bars will actually give you a small free tapa to go with a drink!

You can order a few in your chosen bar of choice or better yet you can, in Spanish tradition, move from bar to bar sampling the best of each with a drink. Basically a food crawl.

“A beber y a comer, que el mundo se va a acabar.” ( to eating and to drinking, for the world is going to end! )

I wandered around the dusty sun-baked beautiful Andulacian streets with shaded green balconies. I strolled along beside the green river alive with light, dancing like silverfish on the surface. I sauntered slowly through narrow ancient cobbled Seville streets between beautiful bright painted homes.

Obviously, of course, during the day I sampled much tapas! The food here is so good and wonderfully cheap compared to London! If you haven’t visited Spain and tried the food here you, my friend, have missed out.

I visited one of the most famous of Sevilla landmarks, The Seville cathedral and the Geralda tower -gothic masterpieces! Stepping into the hallowed shadow shrouded sanctity of the cathedral, my lips formed a silent wow. Rainbow light falls into the deep dark and illuminates from high above.

The Cathedral of Seville boasts the third largest unsupported dome in the Christian world. Its splendid riches are almost beyond words… The Geralda tower itself winds up and up and up and up towards heaven or forever. Reaching the top gifts you with a breathtaking view of Seville spread before you.

The most famous son of Spanish food is the paella. The name derives from the dish it’s both cooked and served it. Traditionally made on a Sunday by the man of the house.

What is Paella, you ask? It is a rice dish flavoured with saffron and containing meat or fish, along with vegetables. NEVER has Chorizo in it. I’m looking at YOU, Jamie Oliver. I am judging you.

“If you have overcome your inclination and not been overcome by it, you have reason to rejoice.“

I caught the bus to the ancient ruins of Italica. Once glorious, it was the third largest city in all of the Roman Empire. Now, it´s white bones exposed, crumbling in the dust and the sun wrapped in an air of faded glory and echos of gladiatorial games cry from distant past.

I really enjoyed Italica and especially the ruins of the amphitheatre! As I walked into the arena I imagined what it must have been like for a gladiator to stand in the sun with 20,000 Romans seated all around howling for blood. Demanding blood. Screaming for blood -your blood.

If you killed enough, bathed in blood, aching soul to sandal, and you screamed out a question into that frenzied crowd: Is that enough? Is that enough blood? Would they, at last, be saited? I wonder how many pained ghosts stood with me in the sun that day?

The rest of Italica is spread out over a large dusty area and took me some while to walk around in the blazing heat. I was glad I had my water bottle with me! The streets are lined with some of the original slabs and the walls of temples. Remnants rise from the dirt to show you their murals and statues. We were here, they say. This mattered they tell. Once, we dressed in glory.

The bus back to Seville is cool and comfortable. I hope you enjoyed this taste of Sevilla and nearby town of Italica. I finish writing this and now I go out into the hot night of in search of my dinner. Tonight, full of good food and wine, I believe I shall dream of flamenco and gladiators, sunlight and faded glory.

This is actually a modern photo… I couldn’t find one taken back in 2005.

Breakfast in Spain can be many things but one of the best is churros con chocolate. A fried long doughnut covered in sugar is dipped in hot chocolate thick enough to stand a spoon in!

“Be excellent to each other“

Well, I hope you enjoyed this time trip to sample a small taste of Seville in September 2005. For clarification for those who would like a little more information. Seville is a small European city in the south of Spain in the region of Andalucía.

As you can guess already from this post, the region is famous for its gipsy culture and flamenco music. Flamenco is the beautiful music of love and sorrow dragged white-hot from the heart. The Moorish influences are obvious. It’s a bit of an acquired taste but spending so much time in Spain -I acquired it.

One of the most famous flamenco singers is Camarón de la Isla ( Shrimp of the island ) One of his most famous songs is Como el Agua ( like the water ) and is probably my favourite flamenco song.

What do you think?!

Spanish food used to be my crush before I discovered Thai food. Spanish food is very much an underrated cuisine. I think it’s the best of the Mediterranean cuisines. Italian gets the glory but in my opinion, Spanish food is better than Italian. There. I said it. No, I won’t take that back. Paella is better than risotto. Pasta is fine but wouldn’t you rather eat potatoes, especially fried?

There are so many wonderful dishes that it deserves a post of its own. I have some great recipes, including a recipe for paella de Valenciana taught to me in Valencia, Spain, by a Spaniard -a recipe taught to him by his father and passed down through generations.

Spain is worth visiting for the food, alone! you haven’t lived till you’ve eaten a doughnut dipped in chocolate for breakfast or known the simple pleasure of eating a Spanish omelette shoved into a crusty bread roll while sitting on the steps of a cathedral.

In case you are wondering about visiting Sevilla in September too, it’s a great time to visit. You are drawing towards the end of the tourist season so there are fewer crowds and cheaper prices. The weather in Seville in September is perfect too. I always used to pick September or October for Spain. High season is a little too hot for me.

Well, for now, I will bid you a fond goodbye but never farewell. I will see you here again soon, my friends. If you enjoyed this article please share it. Consider subscribing! It lets me know who is reading and what audience I have. As ever, I would absolutely love to hear your thoughts down in the comments box. Don’t be a stranger!